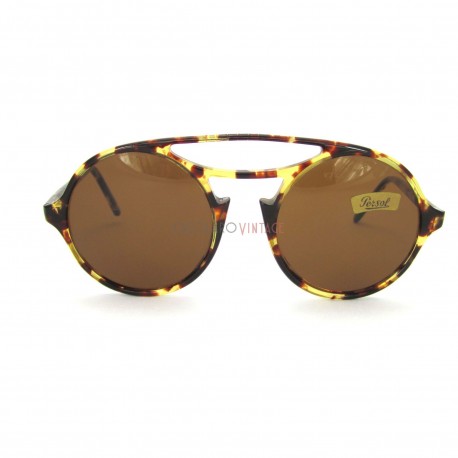 This product is no longer in stock

Turin 1917, Giuseppe Ratti, photographer and owner of Berry Opticians, began an adventure destined to lead to international success. Indeed, it was in a small courtyard in Via Caboto that he began to make technically advanced glasses, designed to satisfy the demands of pilots and sports drivers who required comfort, protection and optimum vision. Subsequent development of the Protector model, guided by an intuition and determination to create truly revolutionary sunglasses in terms of quality and ease of wearing, led to the creation of the Persol trademark (Persol from “per il sole” meaning “for the sun”, highlighting their function of protection against the sun’s rays). Model 649, built for tram drivers in Turin who needed large glasses to protect their eyes against the air and dust, was created in 1957. The novelty of its design made it a very successful pair of glasses, copied over the years by many competitors, and in 1961 they entered into legend when Marcello Mastroianni wore them in the film “Divorce Italian Style”. The 1980s extended the considerable attention that Persol had always paid to technological innovation and care for its products. Indeed, it took part in several expeditions to test its lenses at high altitudes and in the desert, verifying their performance in extreme conditions, and to experiment with the use of innovative materials. In the early 1990s Persol΄s female image was entrusted to Italian actress Ornella Muti, for whom Persol purposely created a pair of incredibly popular glasses (the elegant 830 model), and then in 1993-94 with super model, Carol Alt. She too was dedicated a personalised model (the Carol 853 model).